Happy Friday the 13th, everyone! For those of you who are superstitious- be extra careful while you’re out and about today! As for me? Well, after work- I’ll be heading out with friends to catch honorary screenings of the first two “Friday the 13th” movies at Rocky Woods Reservation in Medfield.

Speaking of Medfield, by the way…

One of my favorite places to visit in Massachusetts (and it’s only about 45 minutes away from me)– is Medfield State Hospital- a long abandoned former mental institution that was first opened in 1892 and added to the National Register of Historic Places in 1994. Although the interiors of the numerous buildings spread out across the area are off limits due to asbestos and hazardous conditions after decades without routine maintenance, the grounds are still open to the public for those looking for a unique place to go hiking, biking, or- as my most recent OOTD post proves- want a semi-creepy backdrop for photos.

I’ve gone up to the grounds countless times over the years, and I’ve found that this time of the year is usually when it’s the best to visit- and not just because the place is pretty spooky- but because it’s not too hot (or too cold!) to be spending a significant amount of time outdoors, and even though much of the area is overgrown- the bugs aren’t nearly as distracting as they are during May or June, for example.

Usually when I’m visiting- I’m the only one there. On a couple of occasions I’ve been one of maybe a handful of visitors- but Medfield State Hospital is almost always eerily quiet- so imagine my surprise when I went up to take a look around with friends this past weekend and was greeted by an entire Boy Scout Troop who were camping on the grounds overnight as part of a Halloween-themed excursion.

(Side Note: That’s actually an insanely cool idea and I wish I’d thought of it!) 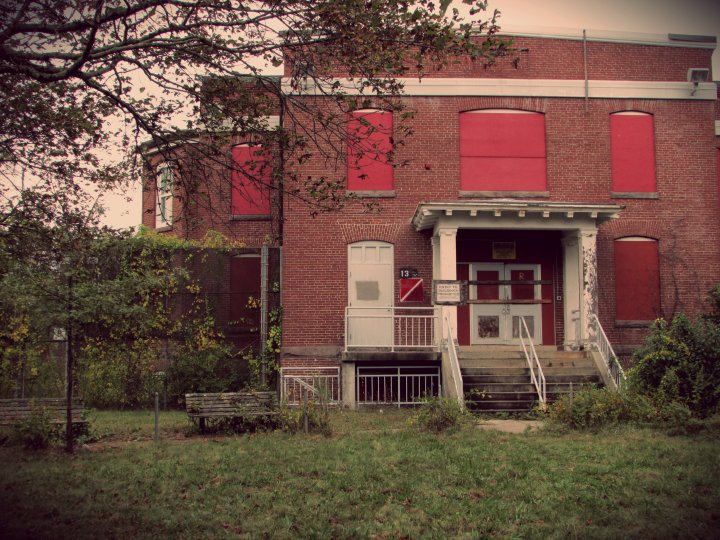 The kids were very sweet and were thankfully respectful of the buildings. Although they were all running around during the entirety of our stay- not once did I see them doing anything potentially dangerous or destructive. They actually carved Jack-o-Lanterns to place on the exterior steps to a few of the former wards and administrative buildings- which added a little something extra in a few of my pictures. It was pretty cool.

There are security personnel on-site 24/7 who do occasional drive-bys to monitor the property- and even they seemed excited about the appearance of a few unexpected pumpkins scattered around.

If you’re ever in New England- this is definitely a neat place to drop by. Just make sure you bring a comfortable pair of walking shoes and a fully charged camera/phone with you!

And now, it’s time to get some work done. Enjoy your weekend, everyone!