I’m a straight woman who was fortunate enough to be raised and currently reside in Massachusetts. I say fortunate because Massachusetts- and most of New England, really- is one of the more liberal and progressive areas in the country. Our impressive list of schools and businesses bring in so many different people from all races, religions, cultures and orientations that my state is like a big mixing pot of never-ending educational and growing possibilities. If you spend any significant amount of time in any of the neighborhoods around Boston- you get to know some of the most incredible individuals and can learn so much from them at the same time.

So when Boston has it’s annual Pride celebration for our LGBTQ brothers and sisters, you know it’s going to be a fun time and that all are welcome with open arms- no matter what- compared to other areas of the country where homosexuality/bisexuality or being transgender is either not properly understood, accepted- or both. I’m grateful I get to be in a city that celebrates the variety of life instead of trying to suppress it or refuse to acknowledge it’s existence. People say a lot of things about Boston- some good and some not so good- but you can’t deny that we are a city that takes care of our residents and look out for one another.

I have a wonderful group of longtime friends from the LGBTQ community, and every year I like to meet up with them while they hop to and from multiple events around the city for the celebration. While I missed the parade this year due to a prior commitment- I was able to head down to Back Bay for a huge block party with plenty of drinks and dancing. The weather was absolutely perfect- so much that when our group eventually dispersed from the party, we were able to enjoy a delicious outdoor dinner in the shade at nearby TICO. 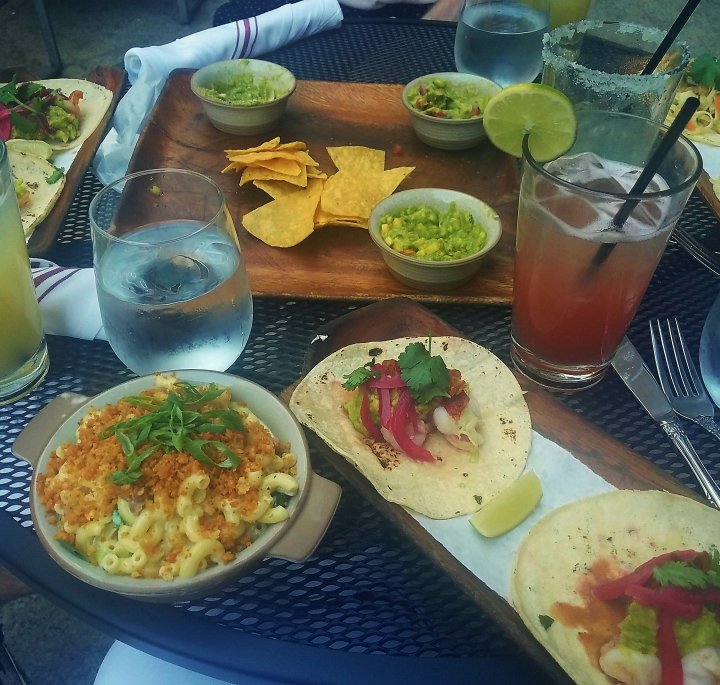 If you stop by, be sure to try their truffle guacamole and watermelon margaritas. You won’t regret it (and yes- that’s a side dish of macaroni and cheese. A girl has to get her carbs when she’s having a little bit of alcohol in the sunshine!) TICO is a bit on the pricier side for tapas- but it’s worth the splurge every now and then. I certainly don’t have any regrets- and the view from their outdoor patio where we were seated was pretty spectacular.

The party eventually made it’s way- and winded down- at Dillon’s on Boylston Street where we once again found ourselves lounging on an outdoor patio and sipping refreshing, chilled (and fairly strong) cocktails under the sunset. When more of our friends arrived from their own dinner reservations elsewhere around the city- we all started to head in different directions. Some friends went to a drag show in Cambridge, others went to a different bar, and I headed home to get some much needed rest after a busy day and an even busier work-week.

Exciting, I know- but I had a lot of stuff to get done and errands to run around Downtown Crossing on Sunday!

Speaking of getting things done- I’m headed off to the office for the day. Have a good Hump Day, everyone!