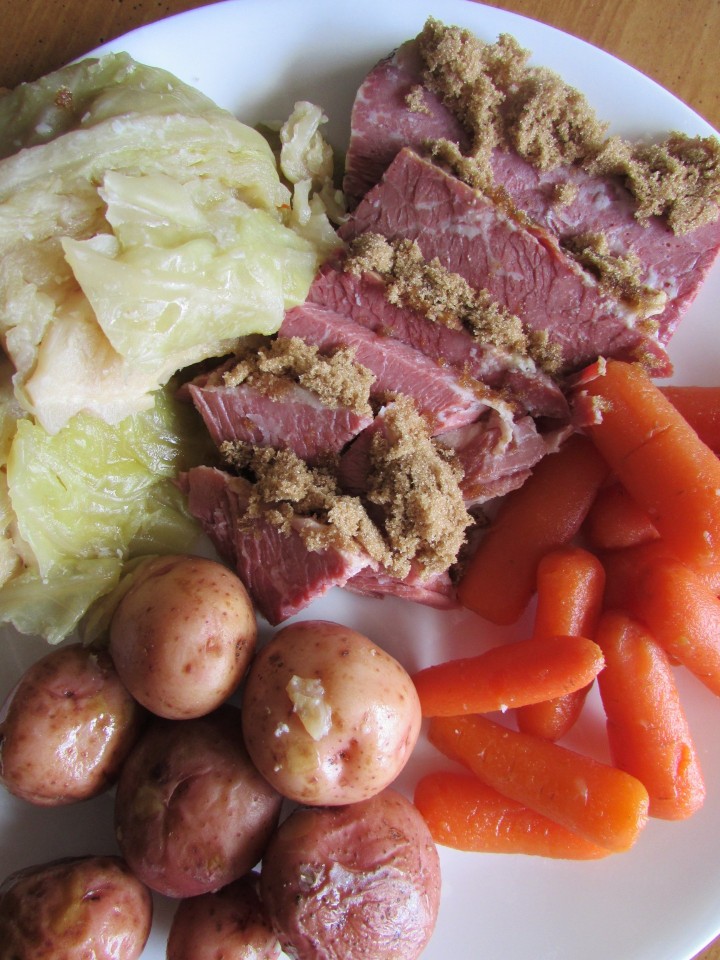 Good Morning and Happy Monday, everyone!

I didn’t forget that yesterday was Saint Patrick’s Day when I posted my “Spring Cleaning” update last Friday- but when you live in Massachusetts and St. Paddy’s falls on a weekend- the party sort of extends into the days leading up to and following the actual holiday until everyone eventually gets tired/hungover and collectively decide it’s time to pack it up until next year.

Such was the case this past weekend, which consisted of plenty of Irish breakfasts, brunches, celebratory parades and green-tinted everything. While I managed to avoid overzealous college students chugging green beer and people dressed like leprechauns loudly trying to trace back their family’s lineage to Ireland (as is tradition!)– there was one thing I made it a point not to skip- and that was my mom’s annual corned beef dinner.

My family isn’t Irish enough for it to actually count- but that doesn’t mean we can’t celebrate our Irish friends with a traditional meal of meat and vegetables. I asked my mom for her recipe to share here this week- and although she doesn’t actually measure out anything (it’s all from memory!)– she was kind enough to oblige and give her best “guest-imates” on how much of everything to use.

READY? HERE’S WHAT YOU DO:

Now, admittedly the cabbage went right into the garbage because, you know- cabbage is gross– but everything else was delicious! I love tender carrots and potatoes- and the brown sugar that was added to the corned beef gave it a pleasantly surprising sweetness I hadn’t expected.

I hope that all of you who celebrated yesterday are recovering smoothly and that today is as easygoing as possible for you. Naturally, I’m back at work and keeping two steps ahead of everything (or trying to, anyway!) so this morning is all about answering e-mails, voicemails, and prioritizing tasks. Living the dream as always!

Here’s wishing us all a good week ahead. I’ll be back on Wednesday with my weekend recap!

Good Morning, everyone! Here’s to it finally being the weekend!

It always feels a little odd updating on a Saturday- especially so soon after my monthly favorites post went up only yesterday morning- but it’s the last day of March and attention must be paid!

March started off pretty crazy- bringing four severe blizzards and a ton of coastal flooding within a two week span here in New England- but over the past few days it seems to have warmed up considerably. There’s still some snow remaining on the ground, but it’s slowly melting away with each sunny day that passes! What’s that saying? “In Like a Lion, Out Like a Lamb”? That basically sums up the weather in March where I live.

And although a lot of my time was spent shoveling my way out from beneath feet of snow day after day- I did manage to get out into the world and have some fun, too! March saw my take a long overdue trip to NYC to celebrate David Bowie, as well as take to the streets here at home to call for sensible gun legislation on March 24th’s Nationally organized “March for Our Lives” protest.  I wore my greenest-greens for St. Patrick’s Day (and am now sporting my Lavender-est Lavenders for the season!) while phasing out my Winter wardrobe to make room for my lighter, more colorful Spring-appropriate ensembles. I spent time with friends, made sure to pencil in dinners with my family- and went on a couple of dates that were a lot of fun.

Tomorrow is Easter- and April Fools Day- and from there I have a lot of fun things planned for the coming month: including another trip to Brooklyn to see the cherry blossoms, a ‘Wrestlemania’ party at my friend’s apartment next weekend, some outdoorsy posts now that the warmer weather is en route, a dive back into Urban Exploration photography with some new locations I’ve recently come across, a few delicious (and healthy!) recipes to share for those who need some help getting out of the Winter funk and who want to get motivated again- and finally- some of my favorite fashion/accessories for the Spring!

I had every intention of opening up my closet to the world this past month- but those aforementioned snowstorms caused my Winter wardrobe to hang around just a little while longer.

But for now I’m off to run some errands and start cooking/baking for tomorrow’s big family dinner. Be sure to peep my Instagram for photos along the way!

For those of you celebrating- have a wonderful Easter- and a great weekend, everybody! 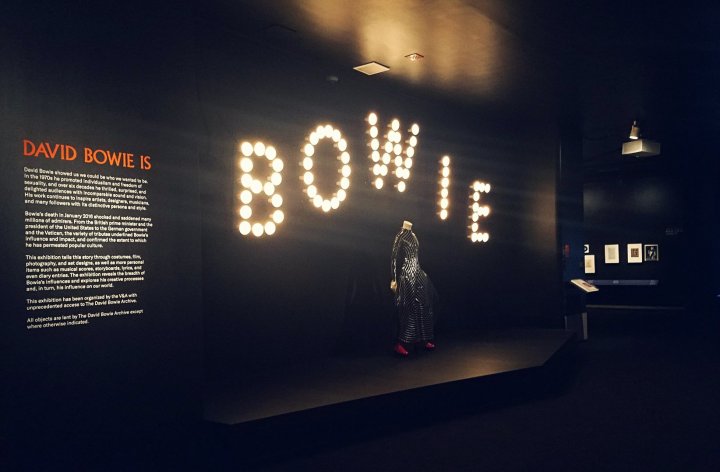 This week’s blogging schedule may be a little off. Instead of my usual Monday, Wednesday and Friday posts- I’m updating today and Thursday (and posts should be back to normal next week!) I was away/out most of this past weekend- which left pretty much no time at all to decompress at my place, catch up on e-mails, and get working on my Blondie Birdie stuff for the week before I was suddenly hurrying back to the office yesterday morning bright and early!

But what a weekend I had! On Saturday, I opted to spend St. Patrick’s Day in Brooklyn, New York- kicking things off at the Brooklyn Museum where I caught their “David Bowie Is” exhibit (which runs through July 15th.) Featuring mementos from Bowie’s childhood up until his death in 2016- including costumes, letters, photographs, instruments,  handwritten music sheets, and so much more- the self-guided audio tour was fascinating and gave an intimate look into the life of one of the most talented, entertaining, versatile artists and visionaries of our lifetime.

I truly could have spent the whole day in there dancing and singing along to the music. It was brilliant- and it you’re in Brooklyn anytime soon- I can’t recommend checking it out enough! 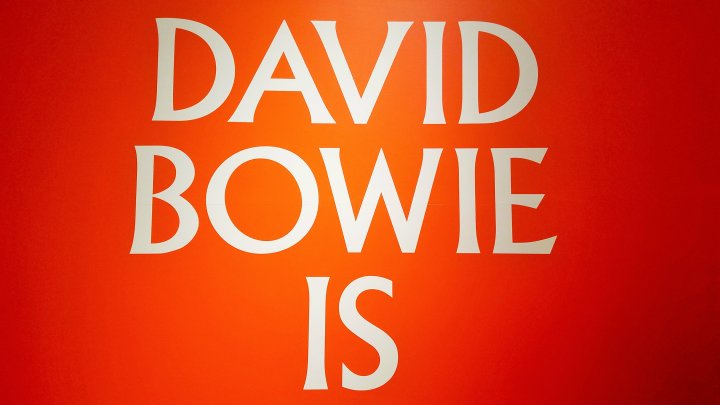 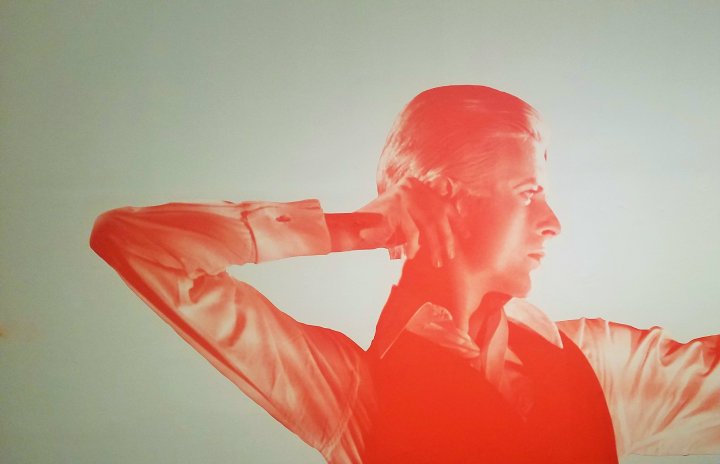 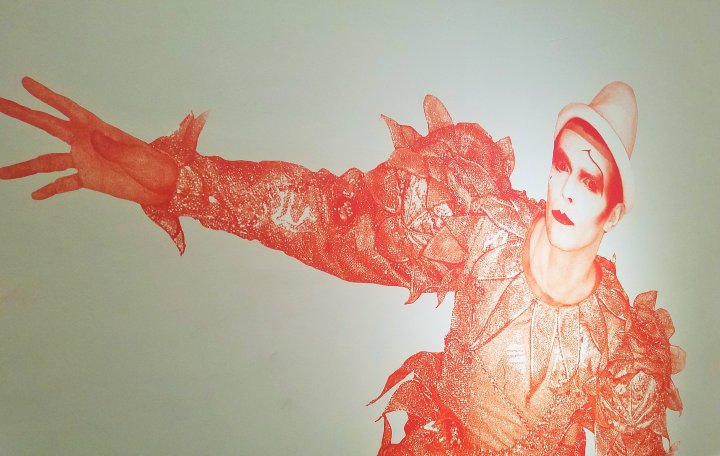 Photos aren’t allowed within the exhibit, but I snapped those in the queue area.

Of course, while I was there- I checked out the rest of the museum, as well- which boasts a pretty impressive art collection. One of my favorite exhibits, apart from the Bowie exhibit and tucked away in a far corner on the fourth floor was Judy Chicago’s ‘The Dinner Party’- a large, triangular dining table scene where each seating arrangement was decorated specifically for various groundbreaking women throughout history.

The museum was a little more lenient about allowing photographs throughout the rest of the exhibits, of course… 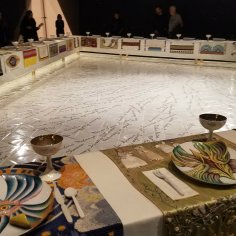 And with Saturday being St. Patrick’s Day- I made sure to grab a Guinness at a nearby pub before i had to get back to my train to catch a late night ride home!

On Sunday, while I had every intention of heading down to catch the South Boston St. Patrick’s Day parade- the cold weather and packed sidewalks caused a bit of a road block, and coupled with the newly shortened parade route due to the still towering snowbanks from the recent series of storms/blizzards- finding a decent spot that wasn’t in the direct path of the very chilly wind proved to be a daunting and somewhat hectic task.

My BFF and I finally decided to celebrate the extended holiday indoors with spicy food and an “It’s Always Sunny in Philadelphia” mini-marathon bundled up under blankets. Worth it. Best of all? Friends who did manage to find a spot with a decent view sent some photos over from the parade- which was super sweet of them!

But for now, I’ve got to get to work for the day! A little later on this week, I’m talking Spring makeup (tomorrow is the first day of the season, after all- even though it doesn’t feel like it here!) including finding the best foundation for your skin tone and type. I’m excited to talk about all the hues and trends I’ve been loving lately!

But until then- enjoy your Tuesday, everyone!